Statistics kept by the NAACP reveal the perils of being African-American, especially young and Black, in America.

Recently the College’s Committee on Inclusive Excellence discussed a letter written by an American journalist to his son. Many members reported the same visceral reaction to the sobering truth of the letter. Professor Santiago of the History Department offered her understanding of the just import of the phrase “Black Lives Matter.” Her words are offered here as a goad to exploration of Catholic social teachings as they apply to the American experience. 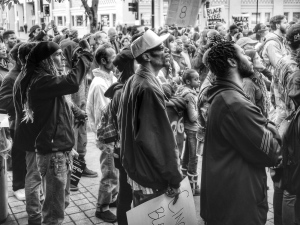 If you have not read Ta-Nehisi Coates’ “Letter to My Son” yet, rush to The Atlantic’s website. He wrote the letter to his fifteen year old boy in response to the murderous behavior of police departments against Black men and boys (and, in fact, Black women too, although those victims have received less media attention). It is also a meditation of sorts on the Black Lives Matter movement, that agglutination of mothers, fathers, sisters, cousins, friends, and neighbors who refuse to keep quiet about the dead once they are buried. Everyone, it seems, has an opinion about Black Lives Matter. I saw a cartoon in a newspaper where an African-American boy who held up a sign saying “Black Lives Matter” was admonished by a white person with something like “if you said ‘all,’ you would get more supporters.” The child complied and revised his sign— not to say “All Lives Matter,” as the sympathetic white person advised, but to say “All Black Lives Matter.” The issue is one of inclusion. And inclusion is what Saint Mary’s College prides itself in, so it involves our community too. So let me comment about the issue to say that the inclusive term is unequivocally “Black Lives Matter.” Not “All Lives Matter.” And here is why.

Inclusion arises from the recognition that there are unequal power relations in our society. That is, power is distributed inequitably in the United States; some groups enjoy more power than do others. Some groups are excluded, in other words. They are marginalized. Inclusion, therefore, starts from the recognition that exclusion is a fact, despite what our founding documents say. Just as the inhabitants of the United States were not equals when those official documents were penned in the eighteenth century, we are not equals now. Inclusion does not assume that, simply because we inhabit a college campus, the historical reality does not apply. We aspire to treat everyone as equals at Saint Mary’s, but inclusion recognizes that we have to act against existing structures to reach that utopia.

How do we know that there are power differentials, inequalities, and exclusion in society and at Saint Mary’s? The test is straightforward: Which group exercises power over which group? In the extreme, which group inflicts violence upon which group? In American society at large, it has become obvious that police forces hurt African-Americans regularly, systematically. The fact that representatives of the power of the state can and do take away Black lives makes the exclusion and marginalization of African Americans visible, obvious, and deadly. To counter that exclusion, it must be named explicitly: Black Lives Matter. Take other examples, closer to home: which group experiences violence the most on college campuses? Young women. They are the group most likely to be assaulted and raped. Such violence makes their exclusion patently clear, no matter that they may be the majority on campuses, including ours. Exclusion is not a matter of numerical superiority.

To be inclusive, therefore, the excluded must be called by name. That is why colleges and universities, ours included, have Women’s Resource Centers and Women’s Studies programs or departments. The same logic applies to Ethnic Studies, African-American Studies, Chicano Studies, or Native American Studies. Those are inclusive terms, not exclusive ones. Highlighting the names of those whose bodies are subjected to pain, suffering, and even death is the way to call them to the table, to invite them from the margins to the center, to begin to erode the inequities that plague our society, our universities, and Saint Mary’s College too.

Yes, all lives matter, of course. But because the media have shown the violence that African Americans have known and felt since the founding of the country, as Coates tells his son, no one can claim ignorance of that fact anymore. Because right now, it is African Americans who are excluded from society to the point of losing their lives at the hands of government officials, those who care about inclusion must raise the banner that says, in no uncertain terms, that “Black Lives Matter.” As a community that aspires to inclusive excellence, Saint Mary’s College should do no less.

2 thoughts on “The Paradox of “Black Lives Matter””