Skip to content
Posted on August 1, 2016 by Brother Charles Posted in Christian Brothers, Church and World, Liturgy and Prayer

The Chapel of Disclosure: Spiritual Rest and Discovery in the De La Salle Centre in Groot-Bijgaarden, Belgium

This week’s article is dedicated to the memory of Father Jacques Hamel of Rouen.

What does sacred space look like in a population of 5% church-goers? This was a central question for a team assembled by Christian Brother Herman Lombaerts of Belgium. The Brothers of Belgium operate a small conference center on their old provincialate/novitiate grounds in the village of Groot Bijgaarden. A number of years ago Brother Herman, professor emeritus of the Catholic University of Leuven, brought the question of what to do with the chapel of the conference center at a time now when there is no longer enough interest in religion to sustain its traditional use. Does it become a storeroom, small theater, or office space? What then of the Spirit and room for the spiritual life? The Brothers took up the challenge and formed a working group under Brother Herman’s leadership. They engaged an architect, Tom Callebaut, and set to work in renovating the chapel space. The results are best told in the words of Brother Herman. (1)

“The radical new design of the chapel from 1924 is a first step towards transcending contemporary religious alienation…. ‘Traditional’ points of recognition have been shuttered away to create a new environment. The visitor enters an open, apparently undefined space: no center, no orientation, no images. There are no artifacts, no familiar liturgical features, nothing to stimulate customary ritual behavior. A white ceiling, walls with white shutters separated by thin red vertical lines, a carpet of white sand. The ambiance is one of austere and serene receptivity towards the visitor and the visitor’s inner reality.”

“In its new form the empty space speaks its own language and follows its own grammar: not figurative, but abstract. It is the language of interior silence, of the liberated spirit, of our awareness, of sensing a personal call. As if an opportunity is being offered to embrace new life, to breathe anew. People who encounter one another in this space recognize the surplus value of their participation in something different, in something that claims them, unexpectedly, unforeseen.” 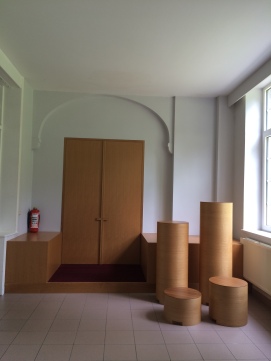 One enters the chapel through a vestibule, a place to remove shoes and socks. The floor of the chapel is filled with pure, white sand. Round wooden seats are scattered about. The walls of the room “shutter” one in, but their whiteness allow inner disclosure. The panels of the walls can be opened at any time, releasing on one side windows onto the greensward beyond, on another the old sanctuary of the chapel, and on the walls between, old stained glass images of the saints.

Brother Herman has likened the white space of the chapel to Lasallian schools as “white spaces.” The schools, like the chapel, are places where individuals can get in touch with the spiritual dimensions of life and glimpse openings of true identity and their place in the world. In his words,

“At the end of the 17th century De La Salle and his teacher-brothers committed themselves to liberating the children of the poor from the deadly vicious circle in which they found themselves…. In fact, the brothers established a silent white space. The genuine interests of the concrete person of the child and of young people took center stage; unambiguous, and without pretense. Rooted in an open perspective on social reality, new opportunities arose for young people and they were encouraged to take responsibility for the development of their own lives. In this silent white space, the intentions and motivations behind the brothers’ availability were purified.”

Our Brother continues to reflect on the possibilities of meaning in this new experiment in chapel architecture, even as he and his colleagues welcome new groups. Since its opening five years ago, more than 2,000 visitors have experienced this sacred space. A welcoming place for all, regardless of their background, wherein they might together find spiritual harmony with the self, the world, and others, and thereby connect again with the nurturing divine presence—not a bad goal for chapel or school, home or workplace.

(1) The cited passages are from Brother Herman’s own English translation of his guide to the chapel, Kapel van de Ontluiking: Kapelproject DLS-Centrum Groot Bijgaarden. A brief architectural review of the chapel may be found at the following link:http://www.vai.be/en/project/chapel-of-disclosure-groot-bijgaarden

2 thoughts on “The Chapel of Disclosure”