Skip to content
Posted on August 30, 2016 by Brother Charles Posted in Church and World, Liturgy and Prayer

Holy Mother Teresa of Kolkata, pray for us! 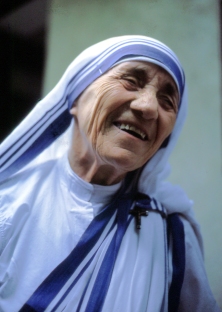 Mother Teresa will be canonized on Sunday September 4, 2016, at Mass in Saint Peter’s Square. She was born in 1910 as Agnese Gonxha Bojaxhiu to Albanian parents living in present-day Macedonia. After twenty-two years of ministry as a Sister of Loreto, Mother Teresa began and directed a ministry that would blossom into a worldwide movement, from 1950 until her death at the age of 87 in 1997. Her followers continue the good work begun by her even to the point of offering their lives for the faith, as we know from the martyrdom of four Sisters and twelve others at a home for the elderly in Aden, Yemen, this past March.

Canonization is the prerogative of the pope to offer an individual to the universal Church as a model of heroic virtue and an intercessor in heaven. Pope Francis has chosen to canonize Mother Teresa of Kolkata thus making her a saint in the Catholic Church. He has pointed out how fitting this is as part of the Jubilee Year of Mercy. Mother Teresa was certainly a saint of mercy. She believed that no one deserves to be thrown away or forgotten, not the dying, nor the forgotten, nor infants in the womb, nor AIDS patients. Her zeal in finding the face of God especially in the most outcast presaged Pope Francis’ prophetic opposition to what he has called an “economy of exclusion:”

“Human beings are themselves considered consumer goods to be used and then discarded. We have created a ‘throw away’ culture which is now spreading. It is no longer simply about exploitation and oppression, but something new. Exclusion ultimately has to do with what it means to be a part of the society in which we live; those excluded are no longer society’s underside or its fringes or its disenfranchised – they are no longer even a part of it. The excluded are not the ‘exploited’ but the outcast, the ‘leftovers'”(Joy of the Gospel, 53).

Naming her a saint is an acknowledgement that the holiness given to the Church at Pentecost was present in her palpably. “One, holy, catholic, and apostolic” is a description we give to the Church in the creed we profess as Christians. It speaks of the unity of believers, their worldwide reach, and their sure ties to the first witnesses to the Resurrection. It also speaks of the holiness of the Church, wed to Christ and endowed with the Holy Spirit of God. That character of holiness extends to individuals, some whose holiness continues to be effective in the world long after their passing. The Church recognizes and celebrates individual holiness through the act of canonization, which declares some individuals to be saints in heaven. The Catechism of the Catholic Church (1983) speaks of this sanctity or holiness as an expression of the larger holiness ascribed to the Church by the creed.

“By canonizing some of the faithful, i.e., by solemnly proclaiming that they practiced heroic virtue and lived in fidelity to God’s grace, the Church recognizes the power of the Spirit of holiness within her and sustains the hope of believers by proposing the saints to them as models and intercessors. (1) ‘The saints have always been the source and origin of renewal in the most difficult moments in the Church’s history.’ (2) Indeed, ‘holiness is the hidden source and infallible measure of her apostolic activity and missionary zeal’ (3)” (Catechism, 828).

“Something beautiful for God” is the title of an old documentary and book about Mother Teresa. The phrase captures well the saint’s understanding of beauty, which she saw in the most abject humanity and, in this manner, which rivals and perhaps surpasses Plato’s own in the Symposium (“the lover is turned to the great sea of beauty, and, gazing upon this, he gives birth to many gloriously beautiful ideas and theories, in unstinting love of wisdom”) (4). Christian faith urges us to pursue beauty, whether it be in the perfection of Church art and architecture, or in the perfection of inclusive community. In all manner of things, our faith gives us the zeal to find and lift up the human face of Christ.

One thought on “A Saint for Our Times”