“If it is true that this mystery [of the Holy Trinity], which has no equal in dignity and in holiness, is the first object of all the veneration of the faithful, it should be all the more important to you, since you are obliged to teach it and to make it known to the children who are the living plants in the field of the Church” (Saint John Baptist De la Salle, Meditation 46.2-3)

Those whose lives have been touched by the Lasallian tradition can find continued deepening throughout the years.  One contribution is from the new stained glass art in the chapel of the central house in Rome, recently viewed by Brother Edward Phelan, who reflects on its meaning in light of the Mystery of the Holy Trinity.

A Lasallian Wall of Rebirth

Lasallian themes of Faith and Generativity are captured in the new stained glass art of the Holy Trinity Chapel at the Lasallian Central House in Rome, Italy. It is a glass wall executed by Sergio Verdecchia in the new chapel on the ground floor of the Casa Generalizia. Verdecchia has presented two focal points – one the Lasallian star and the other the white dove.

Lasallians are quite familiar with the star but much less so with the dove. Linking both are the outstretched sides of a large spiral reminiscent of the art found on the burial grounds in Ireland long before writing was invented. Apparently, the spirals have long represented regeneration and birth after death. 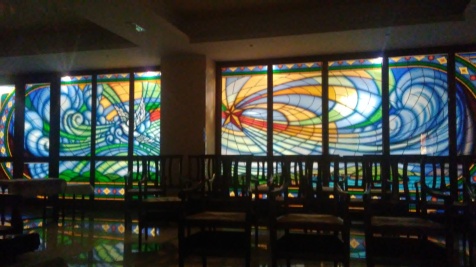 The white dove is all about generativity. The dove is noted for its special care of its young. The dove will stop eating before birth to make its milk purer for the newborn. We all continually nurture new life among ourselves and our students in the spirit of faith even beyond our child-bearing years.

The blue swirls remind one of a tiny fetus found in a mother’s womb at 7 or 8 weeks. Blue is the color of sky and sea – the long time symbol of our unconscious. Perhaps our need and desire for generativity is unconscious and therefore we need to shed some light on it to bring it to more consciousness. Brother Bob Schieler said in his May 15 letter of this year “signs of new life are everywhere.” Some think his inspiration came in quiet moments before this magnificent wall of glass. 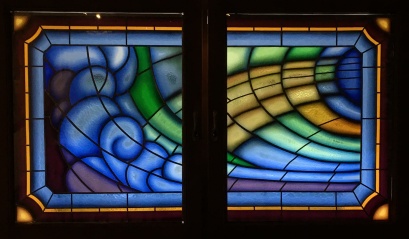 We all are aware of the new life we help to birth in our students and especially in the vulnerable families we help. Perhaps, the message of this wall also applies to ourselves. With the help of the Lord and our fellow Lasallians each of us is birthing a new me.

One thought on “A Lasallian Wall of Rebirth”