There is a new addition to the fountain courtyard to the right of Saint Mary’s Chapel. Near the side exit of Oliver Dining Hall rests a pietà with Mary cradling the dead body of her Son. Made of zinc, the sculpture was donated to the College in 1936 by the class of 1899 [1]. The work formerly graced the Hoffman Patio outside of Dryden Hall. The inspiration is Michelangelo’s work of 1498-1499 preserved in Saint Peter’s Basilica, Vatican City.

The work retains a significant aspect of Michelangelo’s original in the youthful appearance of Mary, who looks even younger than her Son. We have the sculptor’s own explanation of this aspect of the Blessed Mother. Ascanio Condivi, who published a biography of the artist under his supervision, recorded the master’s answer to the question of the Madonna’s youthful appearance: “Do you not know that chaste women maintain their freshness far longer than the unchaste? How much more would this be the case with a virgin, into whose breast there never crept the least lascivious desire which could affect the body? Nay, I will go further, and hazard the belief that this unsullied bloom of youth, beside being maintained in her by natural causes, may have been miraculously wrought to convince the world of the virginity and perpetual purity of the Mother” [2]. 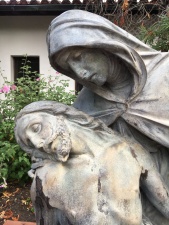 Michelangelo’s regard for continence is captured in the same biography, in a marginal notation written by the artist himself. Condivi had observed that the artist was blessed with good health and a good complexion, due to his continence in sex and diet. Michelangelo added in the margin of his own copy, “I always maintained continence, and if you want to prolong your life, don’t practice [coitus] or do so as seldom as you can” [3]. It can be noted that the artist lived to be 89 years old.

The zinc group joins two other monuments of note. Across the courtyard, kitty-corner, is the memorial for the unborn, which rests under the protective image of Mary Immaculate. It is a simple and touching remembrance, keeping vigil for the lives lost to abortion. The reminder of the sanctity of life engendered in the womb refers eloquently back to Jesus, conceived in Mary before she was wed.

Nestled in the shade of a coral tree is a statue of Saint Isabel of Portugal, peace-maker and patron of the poor. The statue once graced the end of the right-side aisle of the chapel and was moved to the courtyard in the renovations of the late 1990s. Isabel, the patron saint of the homeless and of children who have died, gives us a vision of faithful humanity.

Savior and Mother of God, unborn infants now resting in the bosom of Abraham, and woman of heroic virtue, all, quietly frame a rather busy campus thoroughfare. They beckon the passerby occasionally to linger and to meditate on the fragility and saving possibilities of human life.

One thought on “Locus Amoenus”